Most major topographical features in Ireland have a number of stories and folkloric tales associated with them, often in an attempt to explain the derivation of the placename. To be honest, much of the time, you really have to treat such stories with a serious dose of salts as many of them have been heavily romanticised or ‘fanticized’ , however there’s still some entertainment value to be eked out of them.

One of the more intriguing stories I’ve always enjoyed is that linked to the hill of Dún Ailinne (or ‘Knockaulin’ for the Gaelically challenged). This hilltop in Kildare actually has a number of different stories associated with it but the most interesting is certainly the story of Bailé Binnbérlach mac Búain (Bailé, the Sweet-Spoken son of Buan).

Buan’s only son Bailé was loved and admired by everyone (both men and women) who ever heard him (or heard of him), predominantly because of the astounding stories he told. Bailé was particularly loved, however, by Aillinn, daughter of Lughaidh. This woman who had never met him had heard all his tales and through them had developed a deep affection unlike any she’d ever felt before.

Through shared messages, Bailé and Aillinn planned a tryst at Ros na Righ in Lann Maolduibh, on the south brink of the Bóinn (the Boyne) in Bregia. To reach this place, Bailé travelled from Ulster, leaving from Emain Macha and travelling south over Sliabh Fuaid and Muirtheimhne until he arrived at the long beach now known as Traigh Bailé (The Beach of Bailé – Dundalk).

Here, Bailé and his party unyoked their chariots, released their horses out to graze, and turned their thoughts to celebration. After amusing themselves for a time, they noticed a fearsome and spectral figure approaching swiftly from the south. The ferocious manner in which the figure closed on them, speeding over the landscape, was terrifying to behold for its swiftness was similar to that of a hawk darting down a cliff or to the west wind rising up off the green sea.

Regarding this odd figure, Bailé spoke to his men ‘Let us meet with him and ask his news,’ he said. ‘To ask where he’s going, where he comes from, and to discover the cause of his great haste.’

When he reached the party of travellers, the stranger’s address proved as abrupt as his arrival. ‘To Tuagh Inbher (the Mouth of the River Bann) I return,’ he announced brusquely. ‘To the north, now, from Sliabh Suidhe Laighen (now called “Mount Leinster”); and I have no news but that concerning the daughter of Lughaidh. In love with Bailé Mac Buain, she was on her way to meet him until the youths of Leinster overtook and killed her, just as foretold by druids and prophets. It has always been ordained that the love of Bailé and Ailenn was so great and so intense they’d never meet in person. Instead, after their deaths they’ll meet and not part for ever after. This is my news.’

Bailé’s party stared at the stranger in shock and before anyone could react, he’d darted away from them again, moving like a blast of wind over the green sea until he was gone from sight.

Struck by the news, Bailé collapsed on the spot and despite all attempts to resuscitate him, he could not be saved and lay dead and lifeless on the beach. Grieving, his friends set a tomb at the spot where he fell and raised a large tombstone beside it. A great caoining (keening) began and his wake was held by the men of Ulster, lamenting the loss of Bailé Binnbérlach mac Búain.

Some years later, when his friends passed through that area and visited the gravesite, they found a yew tree had grown up through his grave, and the form and shape of Bailé’s head was visible at its top.

Meanwhile, as for the furtive stranger who’d shared his news with Bailé, he continued travelling south to the grianán (sunny place) where the maiden Aillinn was known to sit chatting with her friends. Noting the arrival of the mysterious figure, she approached and asked him. ‘Where do you come from, Stranger?’

‘From the northern half of Erinn, from Tuagh Inbher, and I travel through this place on my way to Sliabh Suidhe Laighen.

‘And have you any news?’ asked Aileen.

‘I have no real news worth relating,’ the strange man answered. ‘Although I have seen the men of Ulster holding funeral rites at Traigh Bhailé. There they were erecting a tombstone with the name Bailé mac Búain, heir to the Ulster chieftainship, who died while travelling to meet the woman to whom he’d dedicated his love. Unfortunately, their love was so powerful it was not destined for them to meet while alive.’

Having imparted his terrible news, the figure rushed from the grianán.

Traumatised by this revelation, Aillinn fell dead and, as was the case with Bailé, a tomb and tombstone were raised at the site where she fell. Some years later, an apple-tree grew through her grave and local people would claim her features were visible at its top.

Seven years after Bailé’s death, the filidh (poets) of Ulster cut down the yew which had grown through his grave and used its wood to manufacture a poet’s tablet (Taball Filidh). On this, they wrote of all the most famous visions and weddings and courtships of the Ulster people.

In Leinster too, the filidh chopped down the apple-tree from Aillinn’s grave and, in the same way, the great courtships of Leinster were recorded on it.

Many years later, during the festival of Samhain, the great chieftain Art mac Conn, the poets and the craftsmen of every art came to the feast and they brought their Taball Filidh with them. Seeing the two beautifully ornate wooden tablets, Art asked to examine them and held them in his hands, face to face, appreciating their beauty and workmanship. Suddenly, one of the tablets sprang upon the other, and they became united as fast as woodbine around a twig, and it was impossible to separate them forever more. 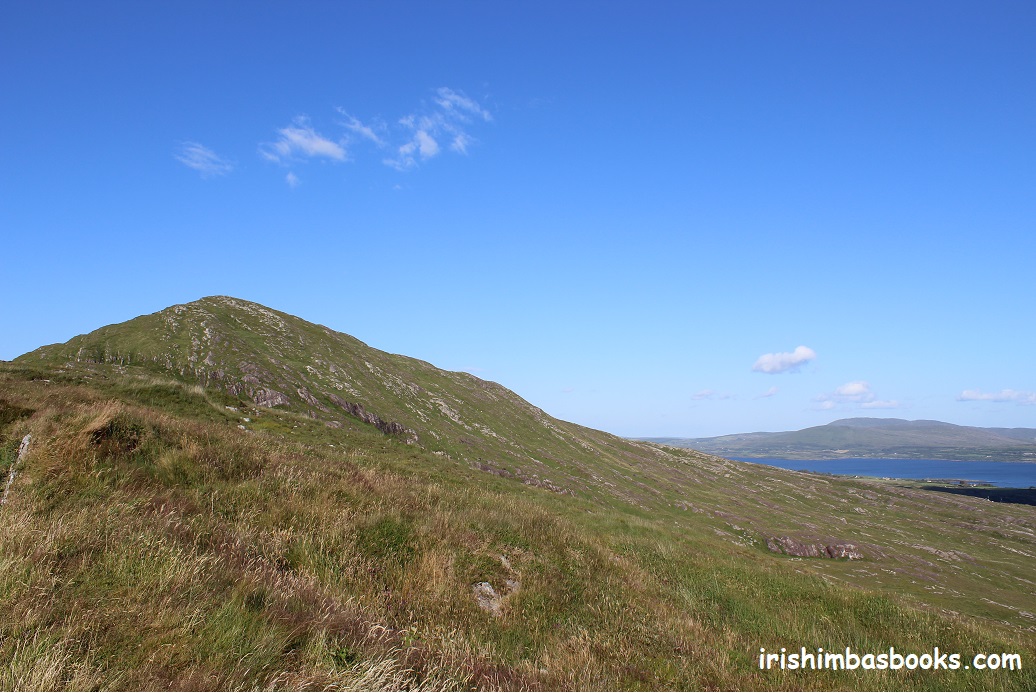 This is the hill known as Suí Finn – Fionn’s Seat (sadly anglicized to ‘Seefin’), a coastal view point on the beautiful Sheep’s Head peninsula in Cork (and the highest point on the peninsula). One of at least ten sites around the country with this name (or some derivative), most of them tend to be associated with the mythological Irish hero, Fionn mac Cumhaill.

One point that’s common to all of these sites, is that they’re located on hill tops or other highland features that usually offer spectacular views over the local terrain. One of the romantic notions behind the naming, of course, was that the mythological seer and warrior had passed some time at that site to admire the view (no doubt thinking deep thoughts and pondering profound concepts as he did so). A number of these sites are cairns, thereby also linking the character with access routes to the Otherworld. 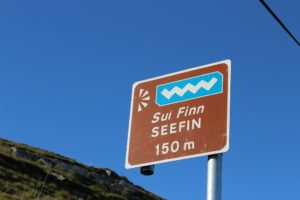 Back in the day, it wasn’t that uncommon to name high points or features in the terrain after national “celebrities” (such as Fionn or one of the saints) but most places tended to be named after local chieftains or strongmen. There are many other sites which include ‘fionn’ or a derivative in the name but, in most cases, these tend to relate to the other meaning of the word (white, blond or bright). Examples for this might include Fintragh (Fionn trá – ‘The white beach’), Finnis (Fionnais – ‘white back’, or ‘white ridge’) etc. etc.

That’s one of the things I’ve always liked about Ireland. Our landscape nomenclature really is saturated with history and reeks with connections to ancient stories and legends. It’s only when you live or visit “new” countries like New Zealand, Australia etc. and see indigenous names completely eroded by colonization and replaced with the sterile names of (relatively) recent politicians or bureaucrats, that you release how good we have it. We owe a huge debt of gratitude to the foresighted people who managed to save our native placenames. 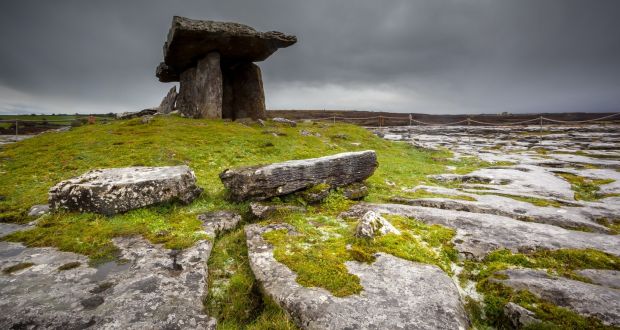 QUEEN MAEVE’S VULVA AND OTHER MATTERS

This article in the Irish Times gives a very nice rundown on the astounding work carried out by the Placenames Branch of the Department of Culture, Heritage and the Gaeltacht. In a sense, this particular group carries out a similar kind of preservation/conservation work to the very effective Irish Folklore Commission (who started work back in the 1930s and finished in 1971).

Ireland’s extremely lucky to have such a treasury of placenames because each placename carries elements of language, history, geography, beliefs and so on. Some names are based on people or events who have disappeared from societal history but there are enough in the reminder to establish overall patterns that give insights into our ancestors’ lives and how we ended up where we are in the world today. This is particularly important when it comes to a placename for a townland or field, which often has a more immediate relevance for families living in a particular area.

Although it’s a great article overall, there’s an amusing irony in the fact that the author refers to ‘ráth’ and ‘lios’ as fairy forts. At this stage, most people know they had very little to do with either fairies OR with forts.

The link is just below: