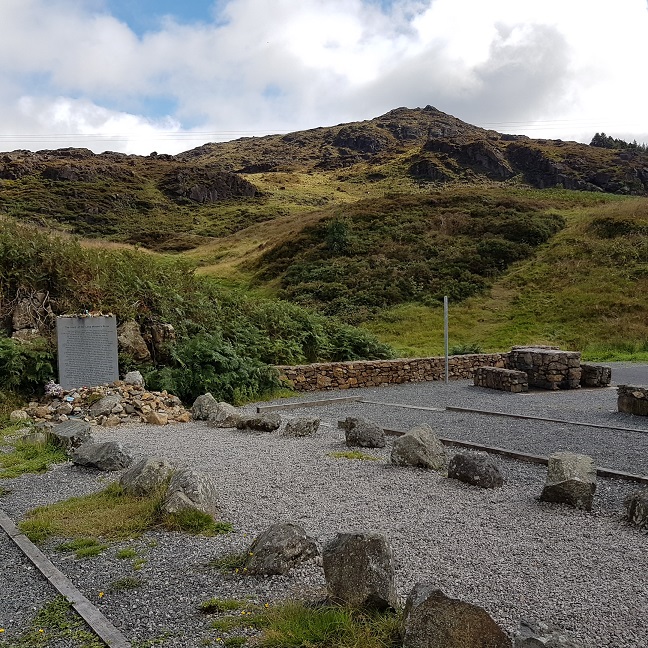 When I get back home, I usually do at least three or four folklore or mythological site visits to test out various bits of research I’m working on. The Long Woman’s Grave near Carlingfor Lough is a bit of a feint but it’s hilarious marketing would put many other, far more authentic sites to shame.

This is the ‘official’ story of the Long Woman’s Grave (which is situated up in the mountains overlooking Carlingford Lough).

Lorcan O Hanlon was the youngest son of the “Cean” or Chieftain of Omeath. His father, upon his deathbed, ordered that his lands be divided between his two sons, Conn óg and Lorcan.

However, Conn óg tricked his brother Lorcan by bringing him up to the Lug or Hollow in the mountains at Aenagh, telling him that he would give him the land “as far as he could see”. The mist and the bleakness of the hollow was Lorcan’s only legacy (as the walls of the hollow blocked any sight of the surrounding land).

However, Lorcan owned a ship and began trading in the East, making his fortune and becoming prosperous. On one of his voyages to Cadiz, he bravely saved the lives of a Spanish nobleman and his daughter. Lorcan was enchanted by Cauthleen, a Spanish descendant of the great O’Donnells of Ulster and he fell in love with her. The pair made a handsome couple as she was 7ft tall, only three inches smaller than Lorcan.

Cauthleen was already engaged to be married but was wooed by Lorcan’s professions of love and the promises of the the good life they would have back in Omeath. The pair eloped. When the couple arrived in Carlingford Lough the locals were enchanted by this tall beauty adorned with jewels.

The couple set along the mountain path until they came to the Lug or Hollow in the rocks. Lorcan bade his bride to stand in the centre and look around as far as she could see as he “Was Lord of all she could survey”. Cauthleen looked around, so great was her disappointment at the realisation of what she’d left behind in Spain, she fell to the ground and died.

Lorcan was horrified that his duplicity had caused his wife to die and flung himself into the murky waters of the marsh at the crossroads. His body was never recovered. The locals found the long woman’s body and dug a grave for Cauthleen in the “Lug Bhan Fada” (Long Woman’s Hollow) where she lay. Each person laid a stone on the grave to raise her burial cairn and here she sleeps today in the hollow of her disappointment and unfilled promises. 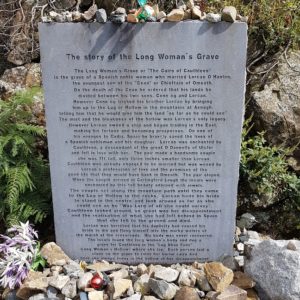 Needless to say, the story is complete tosh used for the more gullible tourists (but, holy hell, there’s quite a few who actually believe it!). Last time I was there (last year) there were two minibus loads of tourists hanging around, taking pictures. For the cheap investment of a story and a few hastily arranged rocks, the site has proven a remarkably effective (and hilarious) income stream for the locals.

The marketing campaign for ‘The Long Woman’s Grave’ hit another notch in 2016 when … Well, just read it yourself. This is from the ‘Irish Independent newspaper:

As proposals go it was daring, divisive, and imaginative. Self-proclaimed Leprechaun Whisperer Kevin Woods, whose leprechaun cavern is listed on TripAdvisor as the second most popular thing to do in Carlingford, announced that he was going to exhume the remains of the Spanish princess who is buried at the Long Women’s Grave and re-inter her a grave over looking Carlingford Lough.

He told the willing national media that the Spanish Nobel woman had dropped dead on the spot after being deceived by Lorcan O’Hanlon from Omeath who had wooed her with his boast that he owned all the land the eye could see. When she saw his kingdom at a hallow near the Windy Gap she was so shocked that she dropped dead and later buried on the spot by locals.

‘It was a horrible thing to do and it needs to be put right. No one deserves an end like that” said Kevin. “I intend to write to the Spanish Minster of Foreign Minister Affairs José Manuel García-Margallo of the People’s Party (PP).to secure support and to Charlie Flanagan own Foreign Minister.’

Local Cooley Tourism Officer Frances Taylor an employee of The Omeath Development Company, entered the fray commenting: ‘I believe Kevin’s heart is in the right place but the people of Omeath will fight tooth and nail to keep her where she is.’

The Omeath Development Association responded, organising a protest march at the Long Women’s Grave on Friday night, which according to Frances was attended by ‘around 180-200 protesters including five of the land owners and locals that work in the Midlands and Dublin travelled to be present.’

The story of the Long Woman was recounted and it was suggested that an annual wake be held at the grave in her honour. The possibility of increasing security at the site was also discussed. Comments on the Association’s Facebook page, however, show that people were unsure whether Kevin’s proposal was a serious threat to remove part of their heritage or a publicity stunt.

Suspicions that it was the latter were fuelled by his announcement: ‘In view of the magnificent turnout by the people of Omeath to protect the Long Woman I have decided to end my efforts to have her moved and will concentrate instead on moving the magic hill at Jenkinstown to Carlingford.’

The truth may never be known but it certainly got people talking.

If you’re ever thinking of starting a business in some out of the way location, ‘The Long Woman’s Grave’ is certainly a good working model!