If you get over to Ireland’s west coast (or you’re already there!) you might want to check out some of the public art projects in Mayo. One of these – Tír Sáile – was Ireland’s largest public arts trail with fourteen separate sculptural emplacements set in specific sites along the north mayo coast. Originally conceived and implemented in in 1993 to coincide with the formal opening of the Céide Fields visitors’ centre (and the associated Mayo 5000 celebrations), the art trail starts in Killala and follows the coastal route around through Ballycastle, Belderrig and down to An Fód Dubh at the end of the Belmullet peninsula. Although there were originally 14 site-specific art installations, only eleven survive today (a number were decommissioned due to lack of maintenance).

Tír Sáile is actually a conceptually interesting project in that it involved the alignment of large structural artworks with some pretty rugged landscape and dramatic natural backdrops with the objective of producing sculptures that “added to rather than detracted from, their settings”. As part of this, one of the fundamental requirements was that only natural materials could be used to ensure the structure in sympathy with their surroundings.

Another aspect of the project was envisioning the utilisation of the old Irish tradition of meitheal where people in rural communities worked together with neighbours to bring in the hay or help out with some other urgent crop. Generally speaking, each farmer/property owner person would help out their neighbour in the knowledge that when they too needed help, that assistance would be reciprocated. This allowed communities to act as a team, build strong relationships and allow benefit to be shared for everyone.

Needless to say, as with all art projects Tír Sáile’s not all about art (Sheesh, really!). Part of the rationale for Tír Sáile (and no doubt part of the reason they managed to get so much public funding) was the justification that the structures and associated marketing would help draw people to that part of Ireland for tourism and local business development reasons. As usual however, when you mix two such different objectives, the results can be very hit and miss.

The success of the project will very much depend on a number of perspectives. From a commercial perspective (in terms of tourism and benefit to local businesses), it’s hard to know if the project was a success. The project was mixed (and overshadowed by) the success of Céide fields and, of course, Irish tourism marketing campaigns like the ‘Wild Atlantic Way’. No doubt there has been some financial evaluation of the project although with local government organisations, public art projects often tend to be ‘closed shop’ affairs, controlled by a certain number of people  with limited accountability and no meaningful consultation. In that respect, the ongoing planning corruption investigation carried out by the Irish Standards in Public Office Commission (SIPOC) doesn’t really inspire confidence.

From a personal perspective, the success of the various artistic installations will very much depend on personal taste. Some people loathe the installations, some people love them. Most people don’t actually seem to know about them (of the ten people I asked, maybe one had heard of them). From those structures I’ve seen (about five), I personally felt that some of the artworks worked whereas others really didn’t and, in this regard, it wasn’t really helped by the absence of any interpretive material (although given that these works are based one persons’s personal vision – not the public’s – I’m not sure how much this would help either).

Tonnta na mblianta was visually … meh. Tearmon na Gaoithe, set on a dramatic headland on Killala Bay, ironically seemed to have the aim of constricting that spectacular view to a single frame (which seems a bit daft). Other structures meanwhile like Court Henge seemed just seemed like a bad decision. The concept behind it (making a structure that looked like a court cairn) was apt but placing in its current location (by the Ballycastle Cottages) just seemed stupid. 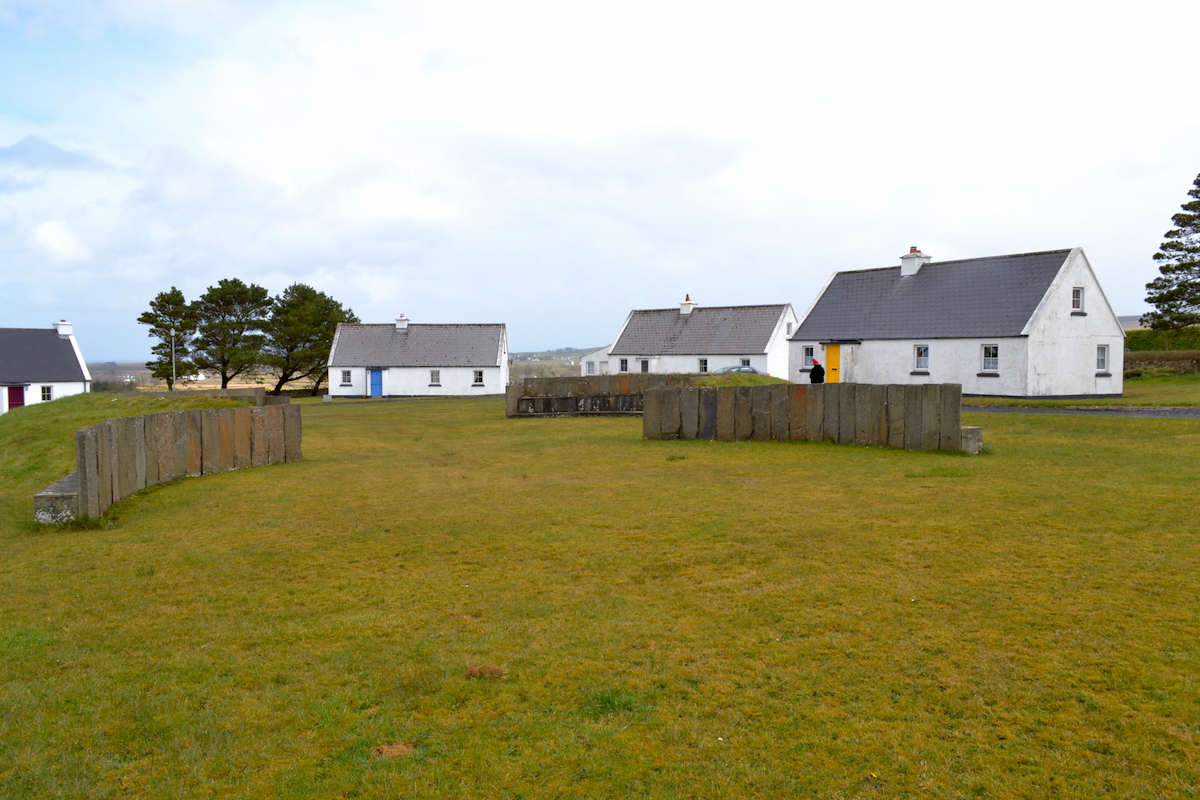 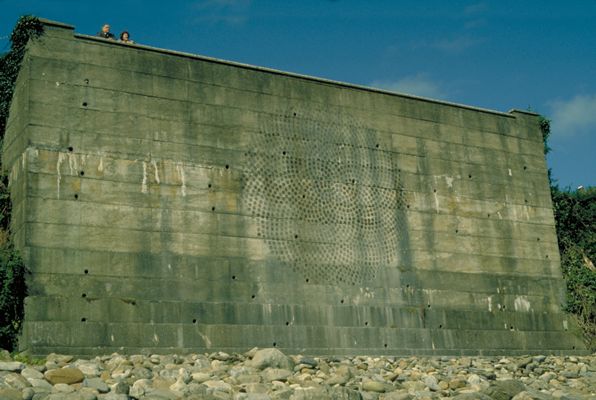 Others will have a completely different view and that’s fine.

Another example of public art (again in north Mayo) is ‘The Crossing’ (a project funded by Mayo County Council, Fáilte Ireland and other stakeholders) which is a ráth-like structure around the blowhole at Dún Briste (Downpatrick Head).

I have to confess, this work really appealed to me and I liked the way it had been incorporated into the landscape but I did wonder why more of the rich local folklore hadn’t been incorporated. This became a bit clearer when I searched online and found the artist wasn’t a local at all but an American artist (Travis Price) associated with the Catholic University of America. His rationale behind the installation was explained as follows:

‘The Crossing evokes the struggle and the sublime slipstream between the mystical and the material, between cultural history and the eternal sacred.’

Have to admit my eyes glazed over there at ‘sublime slipstream’.

On a personal level, I’d hoped we’d grown out of that florid, wince-inducing language (‘mystical’, ‘spiritual’ etc) that foreigners tend to ascribe to Ireland and the Irish. It’s a bit sad to see local authorities in Mayo encouraging it on publicly-funded monuments.