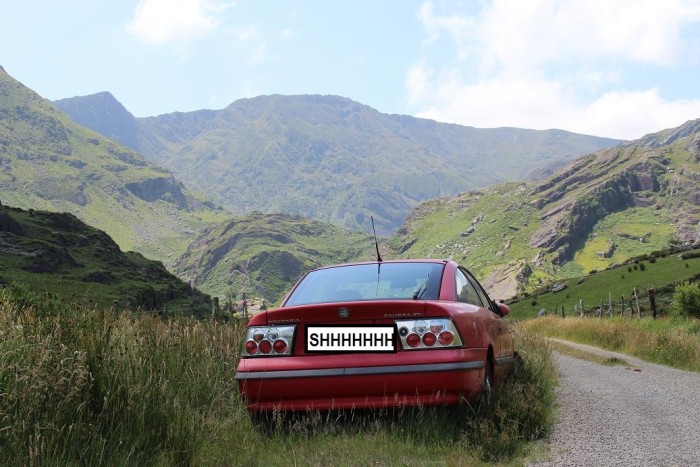 The valley of Cummeengadhra (which probably derives from the word ‘Coimín’ – a commonage or common land and ‘gadhra’ a mastiff) is a pretty isolated spot. It’s very typical of Beara; grey slabs of mountain granite, bogland, shredded tatters of green, incessant rain. All the rock you could eat!

These days it’s a pretty tranquil area apart from some isolated farmhouses, the Shronebirrane stone circle and, of course, The Rabach’s Way. Prior to the Great Famine, though, there was actually a relatively large community living here with at least 29 people registered in the 1824 Tithe Applotment Books. The area is probably most famous, however, because of the deeds of one particular inhabitant; Cornelius O’Sullivan (An Rabach – The Rabach).

One evening in the early 1800s, a mariner is said to have arrived at the house of the O’Sullivans Raib (ráib meaning ‘active’ or ‘bold’ was a family nickname), seeking shelter. During the course of the evening, that mariner was killed because he was believed to be carrying a sum of money. Although all of the family would probably have had some complicity in the murder, it was Cornelius O’Sullivan – the eldest of three sons – who’s said to have completed the fatal deed by cutting the mariner’s throat. Unfortunately for him, one of his neighbours (Máire Caoch) happened to be passing and saw either the murder or the subsequent disposal of the body.

Fearful of the violent O’Sullivan Raib family, Máire Caoch had the sense to keep her tongue for several years but, one day, after a period of sustained, but unrelated, harassment from the family, she foolishly threatened Cornelius by telling him:

I know a secret about you and it’s not about cows or sheep.

Cornelius must have been convinced by the threat for, on a dank June morning in 1814, he followed her up into the high-country grazing pastures and strangled her to death. Once again, however, An Rabach was unfortunate in that there was a witness to this particular murder as well; Daniel Sullivan – a frail man – who was also scared of the violent farmer and decided to keep his mouth shut.

The body of Máire Caoch was discovered, ironically, by a servant girl from the Rabach household. Alerting her friends, they carried the body back to the Rabach family home where she was laid out in preparation for her burial. It was at this point that the community’s initial suspicions of An Rabach were roused. A local at the time belief with respect to murder was that, if the murderer entered into the same room as his victim, the victim’s corpse would immediately gush blood. Unwilling to take the chance, the Rabach refused to enter the house, odd behaviour in such a small community that immediately made his neighbours look at him sideways.

Whatever their suspicions however, nothing more transpired for another 16 years (1830), when Daniel Sullivan was badly injured in an accident at the Allihies mines. Convinced that he was dying, Daniel confessed what he’d seen all those years before to his priest. Horrified, the priest immediately took it to a magistrate and a warrant of arrest was issued for An Rabach.

Forewarned by other family members, An Rabach (who was now about fifty years old) fled his family home and headed much deeper into the valley, finally taking refuge in a cave (now known as The Rabach’s Cave) which offered an excellent view of anyone coming up the valley trail. In total, An Rabach remained in hiding for about nine months and there are numerous tales of the various tricks he used to evade the local authorities. Eventually, however, he was lured back to his home in January 1831 where his wife was due to give birth to his son.

The Rabach was captured by two local constables and a man called Patrick Sullivan (the son of Máire Caoch). In a capricious twist of fate, An Rabach’s son was stillborn. Escorted to Tralee Gaol, he was tried and hanged two months later.