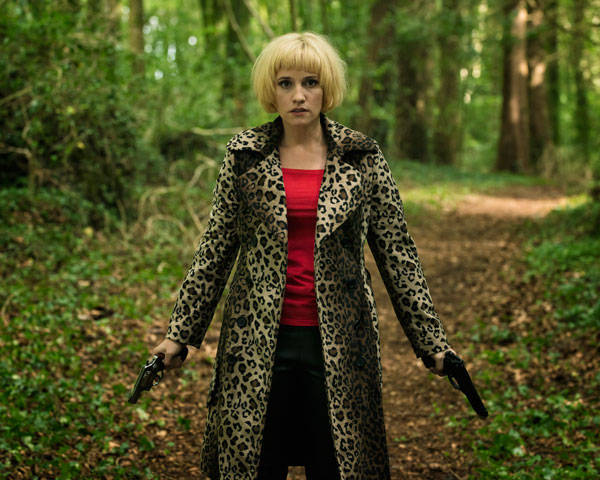 Because of my interest in Irish-based dramatic narrative, I’m always keen to suss them out in other media besides books, particularly where they involve subjects linked to my own passion for mythology and cultural heritage. One such project I came across recently was Paul Mercier’s movie ‘The Pursuit’ (which was actually released back in 2015).

This core concept of ‘The Pursuit’ is actually quite an ingenious one, taking one of more famous ancient Irish tales (estimated to date from the 10th century) and transposing it into a more modern setting to make it accessible for a contemporary audience. Given that this is very similar to what I do through Irish Imbas, I was quite interested to see how it worked on film.

Most Irish people will have some familiarity with the great Fenian narrative- An Tóraíocht (The Pursuit) on which the film is based. This ancient tale concerns an aging Fionn mac Cumhaill (seer and leader of a war party known – in English – as The Fianna) who decides to marry Gráinne, the daughter of Cormac mac Art (a fictional High King of Ireland). During the wedding celebration however, Gráinne falls for the handsome Fianna warrior Diarmuid ua Duibhne. Drugging all the guests except the young warrior, she places him under a geas (a cultural/ritual obligation) and obliges him to flee the fortress where the wedding is taking place. The core of the story is about their subsequent pursuit by the enraged Fionn.

‘The Pursuit’ uses this set-up to create a unique Irish road movie/thriller but in this version the Fenian warrior element has been slyly transposed to a modern-day Gangster environment. Fionn (played by Liam Cunningham) is an aging gang leader, as opposed to a war party leader. Supported by his loyal henchman, Diarmuid (Barry Ward) he runs a drug operation for his Kingpin boss, Mr King. 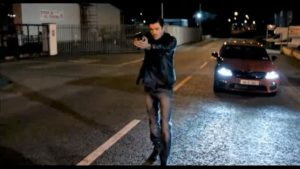 Following a failed attempt on his life, Fionn decides to consolidate his power by marrying Gráinne (Ruth Bradley), the much younger daughter of Mr King. Wedding celebrations ensure but, on this occasion, instead of putting Diarmuid faoi gheasa (under obligation), Gráinne puts a gun to his head and forces him to drive her away.

The subsequent hunt of Diarmuid and Gráinne by Fionn and his men cleverly parallels the growing attraction between the young couple in the original story and the many adventures and encounters they have while eluding Fionn.  One of the most obvious of these is their interaction with the Searbhán (Brendan Gleeson). In the 10th century tale, the newly-pregnant Gráinne develops a craving for a bunch of rowan berries guarded by the one eyed giant Searbhán. Although friendly at first, Searbhán angrily refuses to give up the berries and Diarmuid’s obliged to kill him. You can see how that works in the movie yourself.

All in all, the film’s a pretty decent and well-made gangster movie with some excellent action scenes and sympathetic characters. For me, its weakest element was the misjudged mingling of comedy and violence which meant that, overall, the feel of the film didn’t gel particularly well. The transfer of the ancient narrative however, was carried out relatively well and for those with any knowledge of the story (and many of us were obliged to study it in school), it’s nice to see the ongoing references to the original characters and story as the story progresses. It’s also fun to see the character Gráinne portrayed with a bit more steel in this version given that in the better-known rendition of the original, she was portrayed very much as a spoilt and vindictive troublemaker (hardly surprising given that the surviving manuscripts were mostly written by very religious males with very set views on ‘the weaker sex’). 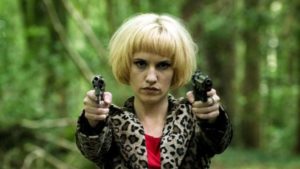 Overall, I’d have to applaud Paul Mercier. The film’s not perfect but its a very credible effort at making our mythology relevant in a contemporary environment. In truth, if we don’t make the stories (and the cultural knowledge behind) them relevant to our contemporary society, they’re just going  to remain as childish folktales for other cultures or skin-deep,  ‘cultural’ market branding.

One comment on “An Tóraíocht (The Pursuit): Fianna Warriors With Guns”