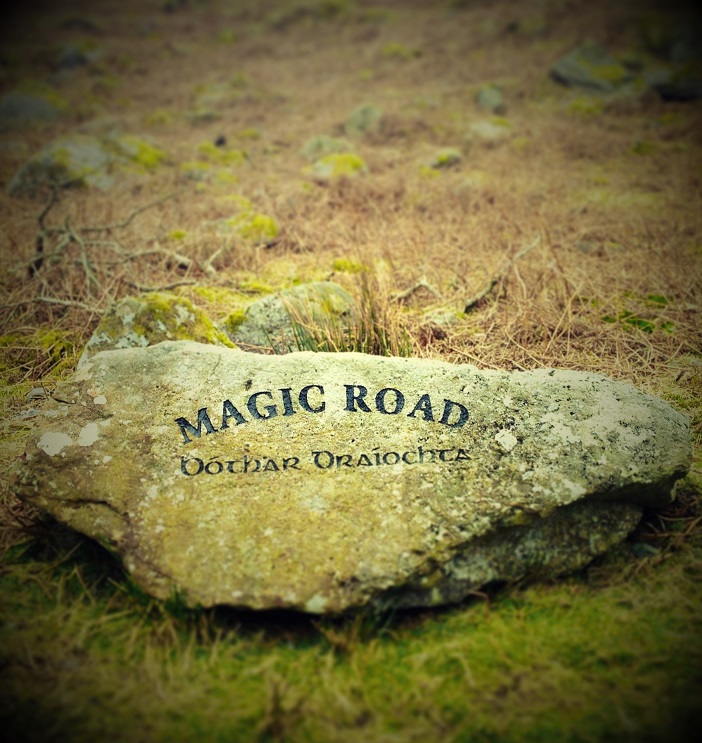 The Magic Hill up in Louth (or ‘The Angel’s Highway’ as it’s sometimes called) is one of a number of magic roads in Ireland where, if you park at the ‘bottom’ of the hill, turn of the engine and shift it out of gear, your car will actually run back uphill.

Magic roads are, in fact, what are sometimes referred to as ‘gravity roads’ (that’s an area where the landscape creates an optical illusion so that a downhill slope actually looks like an uphill slope). There are actually quite a number of such places around the world (and there’s a least three of them in Ireland that I’m aware of). Most have their own folklore associated with them although most of that lore is usually derived after the invention of the motorcar.

When my Dad took us on our very memorable trip to Dundalk (county Louth, we went to see the magic road there and there’s an amusing summary of it here on youtube: http://talkofthetown.ie/2014/02/25/the-real-magic-hill/

Actually, I have a bit of a confession to make.

But the truth is …

I am a closet stone freak, a Dolmen nerd.

Oh, yes! Stone circles, standing stones, cairns, barrows, hillforts. If I had my way, I’d be out there clambering all over them every weekend, grabbing photos, jotting down stories, associated mythologies and folklore. The truth is, though, that in many Irish rural areas these ancient monuments form a key part of the landscape. They’re familiar features that we’ve grown up with, played by, and in some cases identify with and the stories associated with them are passed down from generation to generation in local families.

Take this boulder for example, located in Kileenduff, over a mile west of Easky (County Sligo).

This monument is known as ‘split rock’ ( the English name suggesting this was only applied after the late 1800s) and it’s set not too far inland from the coast. According to a Sligo County Council Geological Site report, the boulder was taken from the nearby Ox mountains and deposited in its present location by large sheets of ice during the last glaciation (about 30,000 – 10,000 years ago). As part of this process, the crack or ‘natural fracture’ occurred. Local legend, however, has a different interpretation of events that has been passed down from generation to generation. According to this, the boulder was cast down by Fionn mac Cumhal as part of a boulder-casting competition with a friend called Cicsatóin (literally: Kick in the Ass). Fionn’s attempt at throwing the boulder was a very poor miscast and he was so enraged he actually ran down the mountain and slashed it in two with his sword.

These days many people stop and pass through he crack but the legend also says that if you pass through it three times (circling the rock on your right), the two internal faces will close in and crush you on the final pass. Everyone scoffs at the legend but you’d be surprised how many people actually give up on the final pass and in any case it’s a great story to tell to your kids.

Which, from an Irish perspective, is often more important than the actual facts!