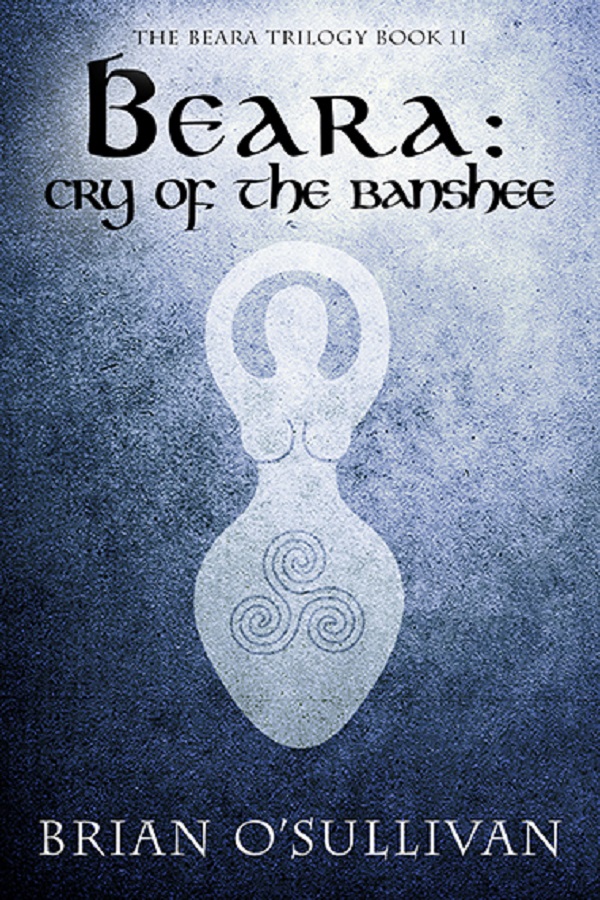 A segment from the second Beara book, Beara: Cry of the Banshee

Although this sequel to Beara: Dark Legends is still very far from even a first draft, I was doing some work on it last weekend.

This is a quiet scene between two of Mos’ co-characters: ‘kind-of’ partner, Ailbhe/Olva (Hungarian magician and acrobat) and good friend Bróna (West Cork’s most industrious hacker). In the first book, both women took an instinctive dislike to each other which was fun to write and play out.

In the second book however, enough time has elapsed that their enmity has softened, to the point they can even have conversation on topics as arcane as ‘connection to place’.

In this scene, they’re standing together on Beara’s south coast, considering the view over Cuan Baoi.

Ailbhe stared at her, at the grey rock, the cold sea and back to her again.

‘I don’t know if I could live here. The weather’s … sad. The landscape has a bleakness to it I …’ Unable to find the words she wanted, she stopped trying and settled for a shrug.

Bróna nodded. ‘That’s only because you read the landscape differently to people living here.’

Bróna mused on that for a moment.

‘Landscapes are like a book.  If you don’t have the necessary vocabulary – the placenames, the local history, the contextual terms of reference … then it’s hard to make sense of it.  There’s no relationship, no emotional connection with it.’

Ailbhe smiled at that.  ‘You need an emotional connection to the land?’

‘You do.  It helps when times are hard.’

‘What do you see when you look around?’

Reluctantly, Ailbhe did another slow sweep of the surroundings.

‘Grey rocks. A grey sea. Gorse. A lighthouse in the distance.’

‘Sure. You see the physical topography of the land. Yet, when I look around, my personal history in this region means I’ll see layers that mean nothing to someone who’s never lived here. I see Cnoc Daod the hill that’s dominated our family’s view for several generations. I see Parc an Tobar – the field with a hidden well behind the fern bushes. I see An Tráthín where one of my brother’s fell and broke his leg.  I see a buachalan bush that the sidhe were said to fly away on, fuchsia bushes that will heal a sore throat.  I see the mass rock where people gathered in secret during penal times, I see an trá bán – the beach where I collected shells as a child and where, as you can see, my own son is now doing so.’

She paused and pointed to a nearby rock coated with moss. ‘Over there by that big tree, about fifteen years ago, I lost my virginity to one of the Harringtons.’

Ailbhe stared at her, then gave one a rare, deep, and very hoarse, laugh.

‘I guess what I’m saying is that our roots run deep here. Our personal history is fundamentally linked to the place, physically through the bones of our ancestors and, metaphorically, through the stories and emotion we’ve shared here. It’s always there – a constant fixture and reference point.  My father saw this view every day, so did his father and so do I. For that reason, it represents a continuity of landscape relationships, of memories connected to places that have been shaped by our ancestors. That emotional connection means we don’t see the land as existing uniquely in the present.’ She shrugged. ‘Which, of course, triggers a whole different interpretation of what we do see.’

There was a long silence when she finished. It went on to stretch far longer than either expected.

‘Did you really lose your virginity under that tree?’ Ailbhe asked at last.

‘Let’s just say that if you’re ever looking for a spot that’s private and dry and doesn’t have nettles, that’s one I’d highly recommend.’