It may be hard to see but there’s a lot of work going on in the background at the moment, most of which won’t become evident until later this year (or early next year). The sheer volume of work has significantly impacted on progress with a number of other projects I’m champing at the bit to complete.
Anyway, here’s a quick summary of where things are at with the more immediate projects:
LIATH LUACHRA III
Currently half-way through chapter 8 of Liath Luachra III which introduces Bodhmhall from the Fionn mac Cumhaill Series. This is the point at which the Liath Luachra Series starts to overlap with the Fionn mac Cumhaill Series. Although to date, the Liath Luachra books have been very much stand-alone, this book introduces the first aspects of a longer-term plot/mystery that eventually gets resolved towards the end of the Fionn mac Cumhaill Series. That said, this book can still be read and enjoyed as a stand-alone too. Its only people following both series who’ll really pick up on what’s happening.
LIATH LUACHRA IV
I had intended to finish the Liath Luachra Series with the third book but after four chapters in, it quickly became apparent I’d need a 4th to complete the story the way I wanted. I’ve done an initial – very skimpy – outline for this but I won’t be anywhere near writing it until next year. This book will cover some pretty dramatic elements that haven’t been covered by Irish writers before (at least to my knowledge, but I’ve researched it quite a bit). I’m very much looking forward to this one!
DARK DAWN
I had two days set aside to complete the final elements of the Dark Dawn project and prepare it for launch but then our Covid-19 lock-down happened. As a result, I now have no idea when I can get this back on track. I must admit, I pull this out and look at it from time to time and, for something that will actually look very simple in its finished form, it’s been devilishly complex.
FIONN IV (Fionn: Stranger at Mullán Bán
This is the book I had to put aside in order to focus on Liath Luachra III. Seven chapters have already been completed and edited. It’s my intention to finish the book once LL III has been released.
Probably best to keep an eye on the website or the newsletter for announcements on the release dates. When they’re ready, they’ll be available here for a few weeks before they’re released to the ebookstores.

I’d have to confess that, to date, the Fionn covers have been pretty much a hit and miss affair (but mostly miss). When we first started publishing we decided to use photomanipulations (where the artist/designer plays around with existing stock photography to create a suitable cover) because of budget constraints. Unfortunately, it didn’t take us long to realize the downside of that approach – it’s actually quite hard to find photos that accurately represent Ireland in the first/second century (go figure!).

Because of the dominance of the Liath Luachra character throughout the first three books, we’d also come to the conclusion that it was important to have a young woman warrior on the cover (so it was clear the books were not entirely about Fionn). Again however, when we searched the available stock, what we mostly found were pics of young girls wielding flashy fantasy-style weapons, bizarre armor that just didn’t fit the realistic style of the books, and, of course, various elements of what looked closely like soft porn or something from one of the old Gor series (without the bondage): 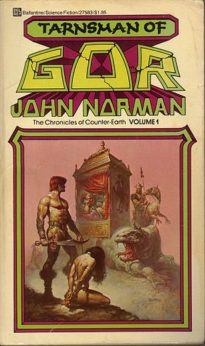 SOMETHING (OR OTHER) OF GOR!

In the end, for the initial covers we settled on stock from Chirinstock (who were exceptionally generous in allowing us to use their photos).

Although the figures in their photos were very much dressed in a style used by Keira Knightly in the King Arthur movie (and there was an unrealistic amount of bare skin for an Irish winter), they were still streets ahead of anything else we could find at the time (although, in fairness, the variation in stock for fantasy covers has admittedly improved over the last year or two).

To give the covers an “ancient Irish” feel, we also provided the designer with some of our own stock, mostly standing stones, stone circles, dolmens and so on.

Of course what we didn’t realise until later was that when you mix scantily clad women with tall standing stones, what you can end up with is something … well, phallic.

It was only last year when I was looking over the covers for the two most recent books in the series that the penny dropped.

Needless to say, the look went against pretty much everything the books stand for in terms of strong female characters.

Desperate to change the covers last year, we made three attempts to replace them but each time we tried we just seemed to hit a brick wall. The first cover designer we used simply didn’t work out (creative differences!) and provided something like a madwoman in a Harry Potter scarf. A second cover commission fell through. The third one we used didn’t really give the look we wanted (but fortunately was still good enough to use for a separate project we’re working on).

Frustrated with the various photomanipulation flops, we decided to seek out an illustrator for the next set of covers and I’m glad to say that’s worked out extremely well. Photostock limits you to what’s available in the various stock galleries (unless you have a very talented designer) whereas with illustrations you can actually start from a completely blank canvas – a huge bonus with mythology, historical or fantasy covers. Working with an illustrator was also particularly cool in that, at long last, we could provide some visual indication of what a ráth actually looked like (good luck finding workable ráth stockphotos!) and what Glenn Ceoch looked like. More importantly, it was also a lot of fun to help design the actual characters. With Liath Luachra for example, we were able to work out a facial style derived from a character from the “Vikings” television series as follows:

Given the subject matter, we still have a warrior woman on the front of at least two of the covers but now, at last , we can also add provide extra detail on some of the other key figures (Bodhmhall, Fiacail, Demne). Honestly! From a creative perspective, I’m kicking myself that we didn’t do this three or four years ago!