I regularly get asked two questions related to the portrayal of 2nd century Ireland in my fiction works (particularly those based on the Fenian Cycle – the Fionn mac Cumhaill Series/ the Irish Woman Warrior Series). These are:

The reasons for that are as follows:

Why do the Irish mythological characters never use bows?
Despite what you might have thought, bows weren’t really popular in 2nd century Ireland. Bows were used in Ireland during the Neolithic and Bronze Ages but all evidence of arrows disappears by about 1500 B.C. and archery didn’t really return to Ireland until the Vikings turned up in the 8th century. This may also explain why the Irish word for bow (boga) is actually derived from Norse.

Interestingly, all the archaeological evidence to date suggests the bow wasn’t popular during the entire La Téne period in Europe (dating from the mid-5th century BC, when the European tribes came into contact with Greek and Etruscan influences to the mid-1st century BC). The sling is believed to have been far more common both in Ireland and on the Continent which is why this particular long range weapon turns up so frequently in the books. Several possible reasons for the popularity of the sling over the bow and arrow, include:

The military impact of bows is far superior when you have a lot of them (and, hence can launch a very destructive flight of arrows). Given the above and the fact that historical accounts suggest the ‘warriors’ of European tribes were very much individual fighters, getting them organised to line up and create a synchronized release of arrows would have been a hard call. A similar problem would have been faced with slings of course but there are reports of slings being used in such a manner from hill forts in Britain and elsewhere.

Many people assume that the Irish used bows quite substantially during the Iron Age period but most of this is due to the influence of covers from works of commercial fiction and of course the 2004 film King Arthur didn’t help with its organised lines of expert bow-wielding Picts who would have put most later medieval armies to shame.

Keira Knightly: Personally responsible for most contemporary people’s interpretation of what a Pict looked like.

Why don’t they use chariots?
Again, all the archaeological evidence in Ireland suggests that wheeled transport – not to mind chariots – was relatively limited in prehistoric Ireland. The earliest evidence of wheeled transport is a set of block wheels dating back to around the 5th century and these would have been for an agricultural cart.

Again, part of the problem when dealing with historical accuracy is that you always have to counter several hundreds years of misinformation (continued today with great enthusiasm through the internet). Most people associate chariots with An Táin and the Ulster Cycle recorded in the Lebor na hUidre and the Book of Leinster (both compiled in the 12th century). In those stories, Cú Chulainn had his own personal chauffer/charioteer, Láeg, who shuttles him around from place to place like a prehistoric Uber driver). 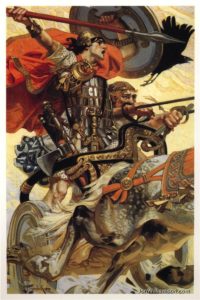 How Cú Chulainn is usually portrayed – zipping around Ulster in his souped-up chariot!

Fortunately, we now know that the early medieval authors of these particular works were very much influenced by other classical literature of the time, particularly by the Illiad and the De Excidio Troiae (The History of the Destruction of Troy) which was actually translated into Irish in the tenth century or earlier. There are clear influences in the portrayal of Cú Chulainn as an Achilles-like figure but the portrayal of major combat using chariots is probably far more relevant to the stony plains of Asia Minor than the boggy and forested lands of 2nd century Ulster where you’d have been hard pressed to find a route suitable for a horse, not to mind a two-wheeled chariot.