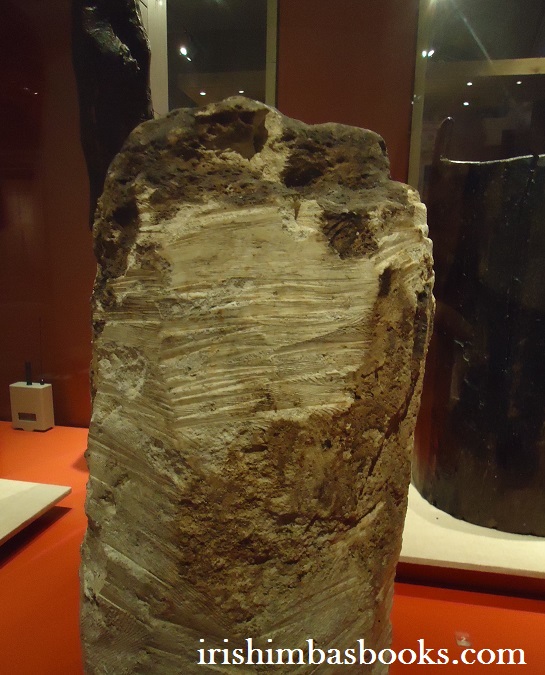 Bog butter has always fascinated me, probably because I love those topics where there’s an element of mystery or no definitive answer. That’s probably not a particularly appropriate thing to say for someone with scientific training but, then again, there are some limitations with the scientific approach. Besides, science has never been about the confirmation of absolutes so much as the reduction of uncertainty.

For those of you who don’t know what bog butter is, it’s a kind of wax-like organic material often discovered around Ireland (mostly in peat bogs) although there have also been several finds in Great Britain as well. Generally, it looks like a giant lump of lard (see picture) and it’s often sealed in wooden churns/pots, although that varies a lot as well.

Much of the academic theory about ‘bog butter’ relates to it being an ancient preservation method for food or alternatively a food processing method to make a food taste differently (the early age equivalent of cuisine flavouring).

Both of these theories hold water. It’s certainly reasonable to assume that our ancestors would try to preserve surplus butter produced over the dairy production periods. There are however, a number of elements that tend to be forgotten.

Most of the more recent folklore around ‘bog butter’ supports the theory that they’re the result of dairy preservation. At the same time, folklore contains many references to ‘magical’ qualities of butter and various stories about how lumps of butter were thrown into loughs and waterways to wash sick cattle and return them to health. One of the problems with folklore though, is that it’s often developed around things that people don’t understand in an effort to make sense of them or to rationalise them. That’s particularly the case where ancient cultural practices have been forgotten and only the physical remnants remain. Generally, people try to explain such mysteries based on their own experience and thus their interpretation can’t always be trusted.

Back in the day, dairy and other agricultural products were clearly perceived as items of great value. It would have taken a lot of resource and effort to produce them and, correspondingly, their use would have involved elements of respect and, probably, ritual. This is why we have the large quantity of folklore stories which illustrate those aspects.

Theories about the other deposits (e.g. gold and other valuable items found in bogs and waterways) have, however, changed over time. Experts are now inclined to believe that these objects were purposely deposited as an offering to appease a land deity rather than being hidden or buried for later use (and then lost or forgotten). Given the value of agricultural products, it’s very likely that these were also intentionally  deposited. Given the fact that ancient Ireland was very much an agricultural-based society, that would also explain why ‘bog butter’ is found in such large quantities.

Needless to say, this is all still speculation. The truth is we’re not certain and with the various theories we’re essentially making educated guesses. Another truth is that we’ll probably never know for sure, that it’ll always be something of a mystery unless some new piece of conclusive evidence comes along.

Despite the scientist in me, I suppose I’m fine with either version.