I’ve been doing a lot of thinking about Irish astrology over the last few weeks. It’s actually a topic I’ve been interested in for several years and one I’d hoped to incorporate into more of my writing. Unfortunately, time hasn’t allowed the development of my research and thinking to a point where I felt it’d be sufficiently accurate or authentic for inclusion.

From an Irish perspective (and from the perspective of other equivalent ancient cultures) native astrology was one of our main casualties with respect to the whole colonialism process. From the infrastructural remains still found all over the country, contemplation of the night sky was clearly a fundamental part of early domestic culture on the Island (and in other lands, of course). Like many ancient cultural concepts however, this is something contemporary societies struggle to understand. These days, our night sky is mostly rendered opaque because of light pollution (unless you’re lucky enough to live in some isolated rural location). Meanwhile, our dense population and other lifestyle distractions also mean we don’t spend much time outside, looking up at the night sky, pondering our interaction with it or reflecting on the scale of things.

In ancient Ireland, there’s no doubt that people’s regular consideration of the night sky would have influenced their belief systems and their societal norms and its importance to them is confirmed by the vast infrastructural structures they left behind. Over the centuries following their construction however, invasion and colonisation by competing societies and religions meant that not only was interaction with the sites actively discouraged and their importance undermined, all the associated knowledge and rituals associated with them, were banned, twisted or eventually eroded from history. With colonisation, the Gaelic-based knowledge and cultural interpretation of the stars (which evolved from the original ‘Celtic’ inhabitants), was supplanted by belief systems imposed by the colonising forces.

Fortunately, we do have a few scraps of knowledge that remain embedded in the language. ‘The Milky Way’, for example, is still known as Bealach na Bó Finne (the Path of the White Bull), Claí Mór na Réaltaí, (the Big Boundary of the Stars) etc. The ‘Leo’ constellation was known as ‘An Corran‘ (which indicates a separate and native Irish interpretation based on a reaping hook (which is what the Irish word means).

A lot of the Irish names, however, are just direct translations of Greek or Roman words as opposed to words derived from our own cultural concepts. The Irish for ‘Aries’, for example, is An Rea (The Ram) – a direct translation of the Roman word (which means ‘Ram’). What was it called before that? No-one knows because that knowledge was lost.

And that, unfortunately, is why, today, Irish people looking at the stars, consider them through the constructs of other peoples’ culture (usually Greek or Roman) rather than those of their own forebears. In essence, when dealing with astrology and its relevance to our lives, we’re still thinking with colonised minds. 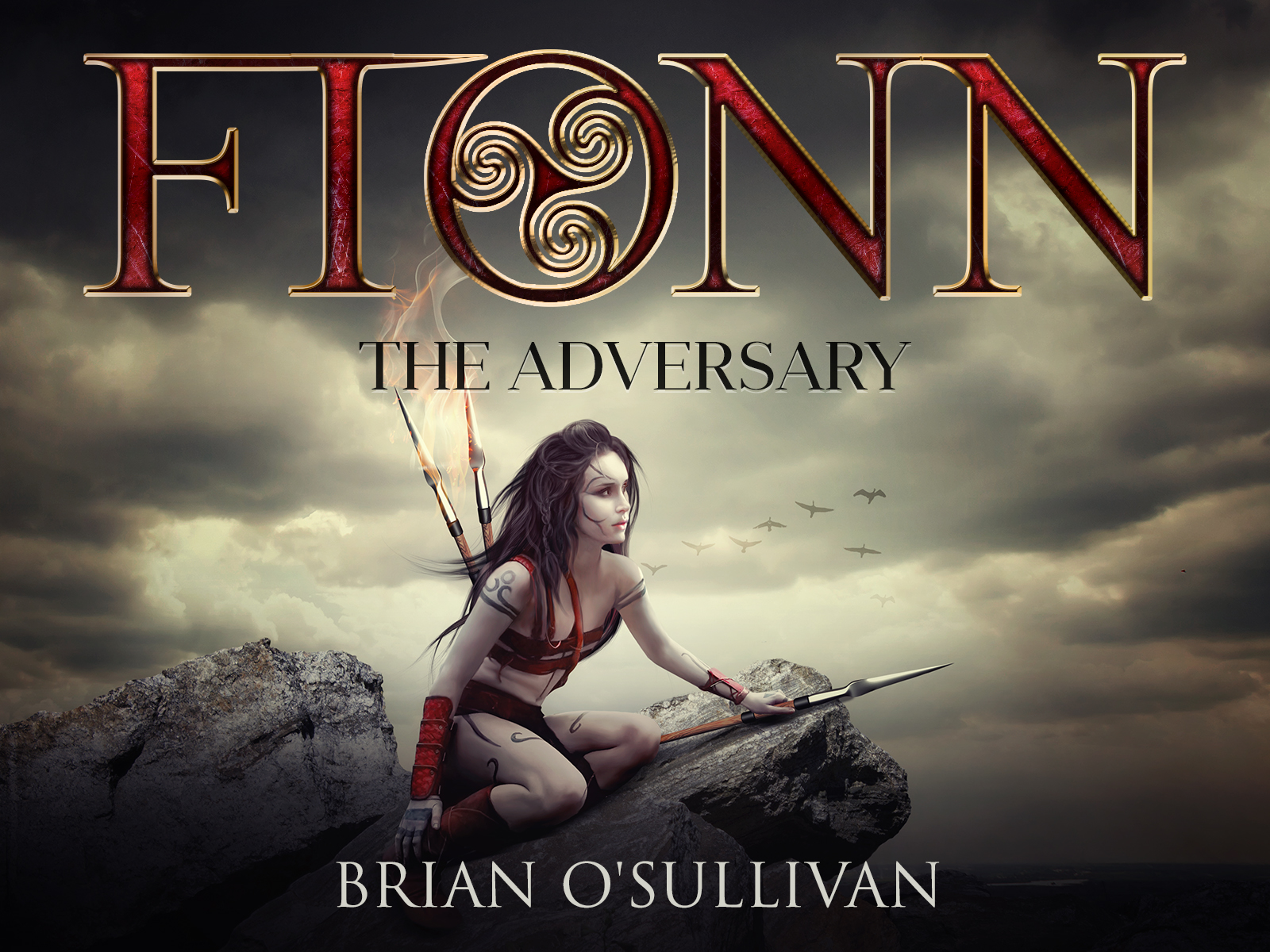 It’s hard to believe that it’s almost four years since I published FIONN 3: THE ADVERSARY – the book that completed the first three-book arc of the Fionn mac Cumhaill Series.

The above image is an alternative cover for that book (developed from a series that the artist went off and created predominantly to satisfy her own creative urgings).  An incredibly talented cover designer, she had the whole fantasy genre down to a tee and, hence, thought I’d love what she sent me. And I did – anything this artist does is amazing!

Unfortunately, by then, I’d also been feeling increasingly uncomfortable with having my work locked into the ‘fantasy’ genre, predominantly due to my growing understanding around the confusion between genuine mythology and ‘fantasy’ (particularly where it relates to anything Irish). The over-sexualised imagery that tends to accompany the fantasy genre was also wrong for the kind of books I produce.

In the end, we used a different variant for the cover (using the original photostock – you can see the final here) but I ended up paying the artist for the additional set of images as well. She’d done some amazing work for me in the past and, frankly, she deserved it. Although I’ll probably never use any them, its nice to pull them out on occasion and appreciate the great skill she put into them 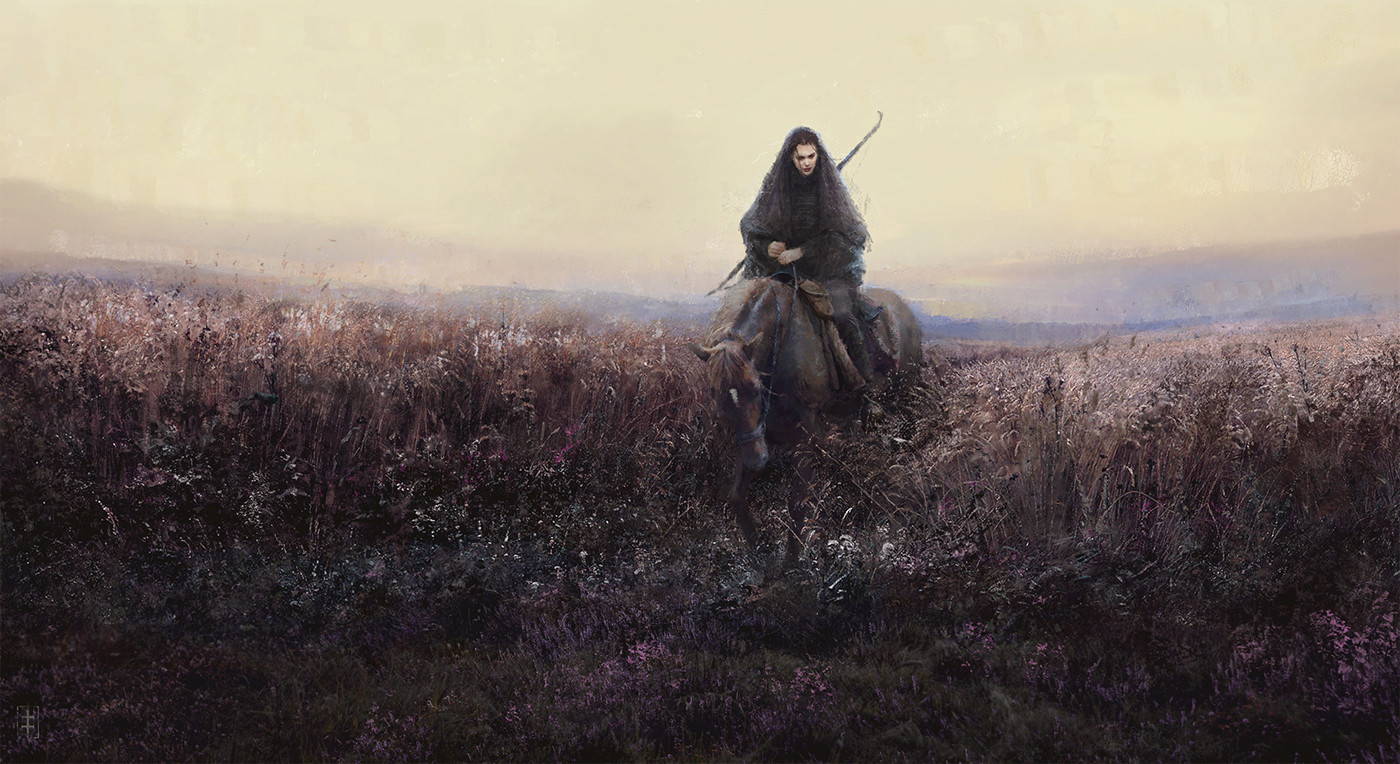 This is another of the images pulled from my regular weekend research of imagery – something about the mood in this image really drew me to Eve Ventrue’s ‘The Rider’ ( the image attached to this post).

I’m currently writing a chapter which involves the use of horses and was reminded of a question I occasionally get asked: Why don’t the characters in the Fionn mac Cumhaill and the Liath Luachra books ride horses?

There are several reasons for this but the most important is authenticity. Back in the 1st and 2nd century, Ireland was a very rugged land, full of dense forest, marshes and terrain that was extremely difficult to traverse. People didn’t tend to travel very far unless they had to and, a lot of the time, the journeys they took were simply too onerous for horses (because of the huge amount of clambering required).

We also have to remember that horses weren’t all that plentiful. For those communities fortunate enough to have a horse, the animals were mostly kept for critical farm work and if they were ridden, they would only have been ridden by the most important members of the tuath (tribe).

When you’re dealing with Irish mythology, Irish history, Irish archaeology and so on, one of the more difficult concepts to get across to people is that our ancestors back in the day were just as smart as we were. In contemporary societies, there’s a general assumption that OUR society is going to continue indefinitely, without any major change. There’s also a common, generally unarticulated, belief, that we’re far smarter or more advanced because ancient societies didn’t have science or believed in a whole bunch of ‘mumbo-jumbo’ religions.

The reality, of course, is that this simply isn’t true and one obvious example of our ancestor’s abilities are the passage tomb clusters spread around Ireland at Brú na Bóinne (Newgrange), Knowth, Loughcrew etc. These passage tombs were incredibly complex edifices that not only required huge structural design, engineering and architectural ability but social organisational skills and in-depth knowledge of astronomy (not to mention the artistic design skills that can still observed to this day).

Complex edifices like the passage grave clusters required a stable and organised society to build them. In practical terms, for example, it’s estimated that the main passage grave at Brú na Bóinne could have been completed over a sixteen-year period provided there was a well-managed workforce of over four hundred people (who ceased other agricultural activities for two months of every year – probably after the seasonal sowing of crops etc.). Such a workforce, however, could only have existed if they formed part of a much larger, secure and organised society. Like many other preceding and subsequent societies, the society that built Brú na Bóinne is now long gone, of course, but the physical remains of their achievements and aspirations still impress us today. 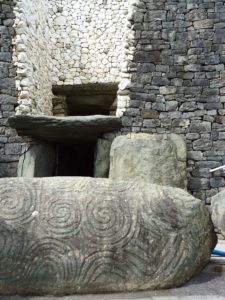 If we look at contemporary Irish society, the only true advantage we have over our ancestors is that we’re more technologically advanced. Unfortunately, technology is not an effective measure of societal health (science and technology doesn’t make our human behaviour any better, it simply amplifies the impact of our behaviour – good or bad). The true problem for societies is that, at heart, humanity doesn’t really change. Many people within our modern-day populations are just as arrogant, just as misinformed, just as selfish, just as power hungry and just as self-destructive as the people within ancient societies and, unfortunately, it’s people’s behaviour that decides the longevity of a culture. 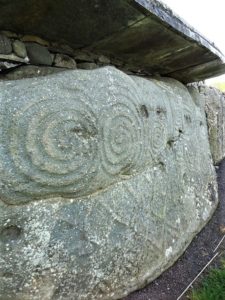 It’s more than likely that the people who built the passage grave complexes at Brú na Bóinne and Knowth had the same condescending opinion as us for those who’d gone before them, for that certainly seems to be a consistent human failing. Nevertheless, it’s interesting to imagine what people will make or our contemporary edifices when they excavate the ruins in another thousand years or so.