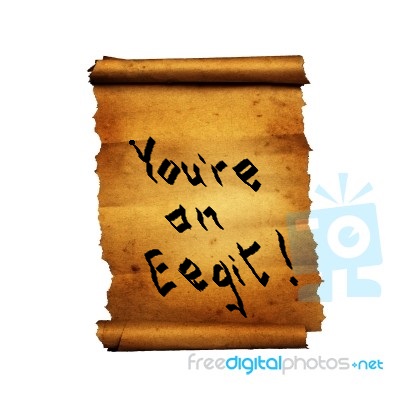 According to legend, the Irish poet Cairbre was the original ‘inventor’ of satire.  This ancient narrative ‘The Second Battle of Moytura’ describes how, during a visit to Bres – the Formorian king of the Túatha Dé Danann – Cairbre was hosted in a miserly hut without any furniture or a fire in the hearth. As a meal, he was provided with three small, dry oatcakes.

Outraged by what he saw as an insult to the respect he was due, Cairbre proceeded to compose a virulent satire against Bres, a composition of words so powerful that they caused his cheeks to break out in boils and blemishes. Given that no king could rule if he was, in any way, physically or mentally ‘blemished’, Bres was quickly removed from power.

Although the Second Battle of Moytura narrative can hardly be considered the most credible of sources (with respect to ‘facts’, at least), we can still be pretty sure the Irish filid (druid-poets) spread it about as widely as they could at the time. Not only did it obfuscate the relationship between a ‘satire’ and a ‘spell’ (both are compositions of words that cause an end effect), it also included a veiled threat to anyone who was considering the possibility of not recognising the power and status the filid felt was their due.

In ancient Ireland, a person’s status (or “honour price ­­– lóg enech­ – as it was more usually known) was particularly important. People in power retained that power through physical force, through a social authority or status based on the accepted consensus of key players in the community, or a combination of both. Hence their love of ritual, pomp and ceremony, anything that elevated their status into a position of status above the rest. If, however, the status of a person (or indeed a representative group) was damaged, then his authority was undermined and his power in the community subsequently diminished.

Obviously, we have to take the ancient descriptions of the filid’s power with a grain of salt (particularly given that many of these stories originated from self-serving poets with one eye on reinforcing their own social status at the expense of others). Although, back in the day, people would have been much more credible, with the advent of technology and easy availability of information, most people nowadays discount the ability of satire to cause physical blemishes.

Despite this inability to cause a physical end effect, the power of the satire remained a powerful instrument, particularly when used against an unjust ruler, a corrupt hierarchy or authority.  Like the ancient tradition of fasting in protest against someone, it had the effect of ruining a person’s reputation, making them a source of mockery in the community or shaming them. In this respect, the satire is just as effective today as it was back in ancient times.

A contemporary Irish example of the power of satire is the television series Father Ted which absolutely lambasted the Catholic Church in Ireland for three seasons between 1995-1998. Initially, this series had to be produced using non-Irish funding as no investor in Ireland was willing to put up the money for fear of the political and social lashback from the Church (evidence of the power it still retained in certain circles). Once the programme was up on screen of course, the thick vein of anger at resentment at the clergy that many Irish people felt (but rarely spoke about in public) quickly became apparent. Within a short time, the priesthood had openly become a subject of ridicule.

Although it cannot be doubted that the influence of the Catholic Church in Ireland had already been on the wane, the arrival of Father Ted marked the death knell of its social authority. Nowadays, politicians speak openly against the church (having initially assessed the public mood, of course) and the organisation is finally being held accountable for the great social harm it was carrying (in terms of child abuse etc.) under the cloak of its better deeds