I recently came across some images for a Guiness campaign linked to the Guinness-sponsored All-Ireland Hurling Championship (developed in 2005 by Yoke Productions) which uses the mythological narrative of Cú Chulainn as the basis for a campaign entitled ‘Stuff of Legends’. That was actually a very clever idea. The well-known Cú Chulainn narrative already has an established link to the ancient sport of hurling but by linking it to the product (Guinness) through the use of the word ‘Stuff’ (this has an association to Guiness through  ‘Aah, great stuff!’ etc.) and sponsorship of the Hurling Championship, a whole web of clever patriotic associations were made between Irish culture.

Fortunately, this being a home-grown Irish production, the narrative didn’t veer too far into the ‘fantasy’ trap (although it did of course utilise the more fantastical story elements of the Ulster Cycle stories). Looking at the imagry produced for the advertisments, you’d have to say the advertisers did an excellent job. The ‘look’ and the ‘theme’ are quintisentially Irish, the adds are visually attractive and, overall, it works very well.

They did however – from a mythologyical perspective –  cock up one of the three campaign images. Can you tell which one it is?  Image A, Image B or Image C? 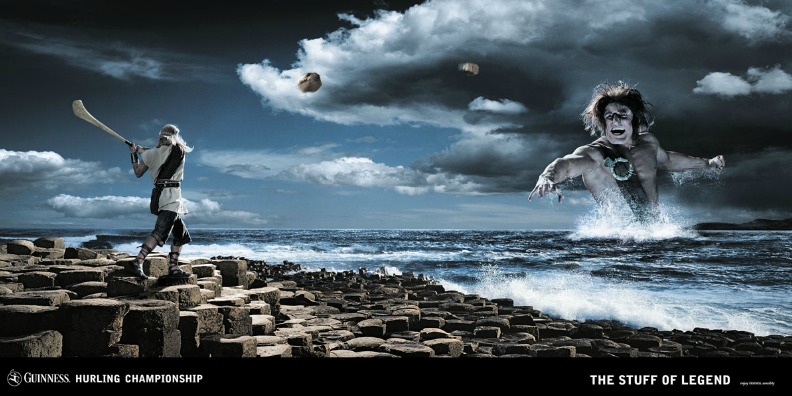 The answer, of course, is Image B. Cú Chulainn has no association with the Giants Causeway in the image. This was actually a Fionn mac Cumhaill story.

Although, eh … I don’t think Fionn had a hurley!