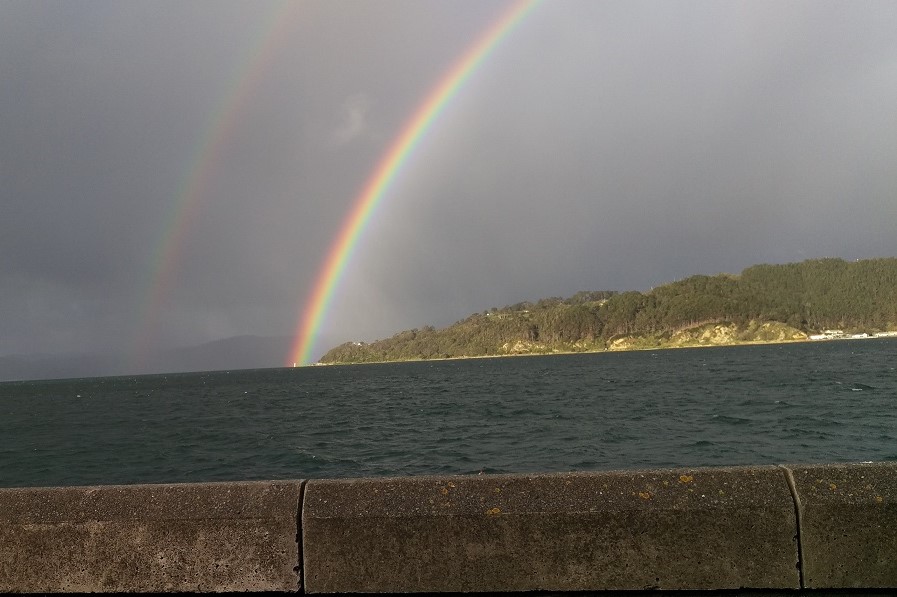 After a long and particularly arduous winter we were rewarded last weekend with this stunning double rainbow over the Miramar peninsula. Set at the very end of the peninsula, it really was an amazing sight from the other side of the harbour. In some respects it felt like a personal message from the Gods along the lines of “All right, lads! Enough’s enough. You can have some sun now.”

When my kids were growing up here in Wellington, I taught them a little poem to help them remember the names of the colours in Irish. It went:

Because of their sheer scale and striking visual impact, it’s hard not to be impressed by a rainbow, particularly the big ones that span large swatches of space. Its’ hardly surprising so, that every culture has some associated mythology or folklore. In Hindu mythology, their Thunder God uses a rainbow as a form of bow to shoot arrows made of lightning. Maori have a legend about Hina (the mother of Maui), the moon, who causes a rainbow to span the heavens for her husband to return to earth. In Ireland of course, the most famous legend is the story of the leprechaun’s pot of gold at the end of the rainbow. Although most Irish people hate the plastic paddy shite associated with leprechauns, I have to admit the central concept of this particular story is quite clever. Rainbows don’t have an end so you can never get the gold. In fact, to see a rainbow you have to have the sun behind you. Hence it’s only got one side as well – truly a no-win situation!!

Ironically then, I once saw the end of the rainbow. This happened when we were kids and my Dad was driving the family home from a weekend in Beara. Naturally, this being West Cork, it was raining but as we drove through the Cousane Pass the clouds cleared and this beautiful rainbow opened up, one end filling the field with the standing stone at the top of the Cousane.

Needless to say, the event caused some consternation amongst the four kids stuffed in the back of the car. My poor Dad nearly crashed when we started screaming at him to stop so we that could run in and get the gold. We were smart. We all knew that you could only reach the gold for as long as the rainbow remained.

For some reason, my father ignored the screeching from behind and kept on driving but I’ll never forget how galling it was to see the rainbow’s end just alongside, marking untold wealth and riches. And us driving placidly (not) by.

I’ve never really forgiven my father for that excruciating lapse of judgement. If he’d only stopped the car for twenty seconds, we’d all be multi-millionaires today.