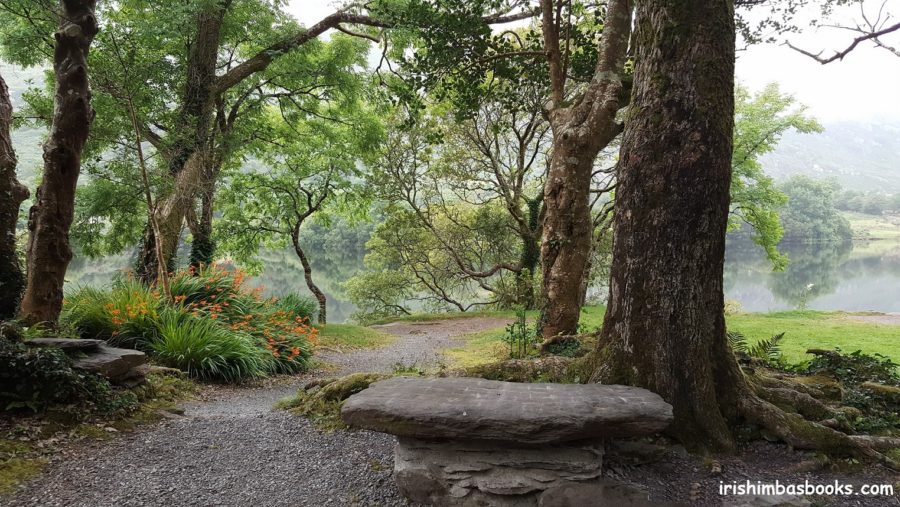 Travelling to a favourite West Cork site this July took on a somewhat surreal edge. Over the morning, the drizzle congealed to mist then back again (several times) before finally deciding to settle on a light grey fog of soupish consistency. Taking the old road right some time after the Coosane – a road I’ve taken all my life – I somehow went astray, heading up into the mist coated hills and ended up negotiating an unfamiliar labyrinth of grey-green botharíns. Beside me, my French friend said nothing, calmly trusting my driving skill as he did his best to locate a view.

When we got to the lake, the water was black and still, the air heavy with moisture. Even as I parked the car however, I could see a busload of tourists down by the water and exploring the island so we retired to the Gougane Barra Hotel until they were gone. Before I went inside, I looked back just in time to see the fog come down hard, swallowing up the tourists. In the odd, fog-bound silence that followed, I could hear the sound of clicking cameras and an occasional laugh and wondered what they could possibly be taking photos of.

One of the girls serving in the café told me that there’d been a theft from the island two months earlier.

‘The mass box?’ I asked, assuming they’d have gone for the little donation box in the rectory, the only cash on the island.

‘No,’ she told me, her voice full of unexpected outrage. ‘An altar stone.’

That threw me. The altar stones are flat, very heavy stones that mark some of the stop points for pilgrims doing a round on the island (the prehistoric ritualistic route still followed by pilgrims today). Most are a few hundred years old and bear deep white marks on the surface where generations of pilgrims have carved crosses when they stop to pray or meditate. The stones themselves have no monetary worth. Their value is entirely historical, cultural and spiritual.

There was a lot of talk in the café about who might have stolen the stone. No-one believed it was local people. The alter stone was a respected fixture in their lives and, more importantly, it would have taken at least 2-3 people to carry it. Impossible then, to keep it secret.

The initial suspicion had fallen on vandals from Cork city but given the amount of effort required, it seemed uncharacteristic behaviour. Divers had also searched the shallow waters around the island but there was no sign of it, suggesting it had been transported away from the site.

The latest theory was that it was some over-avid tourist or an overseas collector of antiquities, individuals so impressed by the site they decided to destroy it.

Later, on the island, a small poster and photo in the rectory confirmed the theft and plaintively asked anyone with information to pass it onto the Gardaí. Staring down at the empty spot where the stone used to sit, I shared some of the girl from the café’s outrage. I wondered whether the stone was now lying in some idiot’s garden, or in their home like a prized museum piece.

I’ve always had a sense of key aspects of Irish culture being eroded but generally these have been mostly at an intellectual level – the different way of thinking we have compared to other cultures, the different way we look at and see the world. The stone however, was a physical representation, a corporeal snippet of native culture.

In some respects, we can consider ourselves quite lucky. The stolen stone is now just a stone with a few crosses on it and has no other meaning that that. In Gougane Barra however, the ritual continues, more popular than ever.

And there are plenty of other stones in West Cork.

Then consider our monthly newsletter (below). More in-depth articles on Irish culture (contemporary or historical), mythology/ folklore, occasionally news on new books, writing or other things that amuse us.